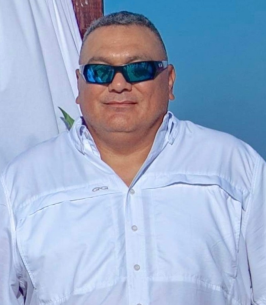 Rosendo "Chendo" Ybarra, Husband, Daddy, Brother, Nephew, Uncle, and friend to many was lifted up to the Kingdom of Heaven on June 12, 2022.
Rosendo was born on Friday, October 26, 1973, in Edinburg, Texas. He attended Edinburg schools and lived his entire life in Edinburg, Texas. He grew up with the love of his parents and his family. Through all the bumps in the road they were there for each other.
Rosendo was the type of person who would give the shirt off his back to help someone in need. He owned Ybarra's Lawncare Service and had clients throughout the RGV. He took great pride in his work always wanting to leave yards as manicured as possible. He was compassionate and thoughtful even in the 100 degree south Texas sun. At times he would mow someone's lawn or trim their trees whether they had the means to pay him or not. It wasn't uncommon for him to leave before he was even paid. He cared about others and put their needs ahead of his own.
He was an avid Fan of the Dallas Cowboys and enjoyed Sunday afternoons cheering for Dak and the Boys. Win or Lose he remained a true and loyal fan of America's team. Rosendo also loved reeling in a beautiful Red Fish or Speckled Trout at Port Mansfield or the Arroyo.
In 2012, Rosendo met Alexis Guzman and immediately knew she was the love of his life. They had three beautiful children together that became his total devotion. Arabella Skye, 8, Ariella London, 4, Ryland Wesley,2. Life changed for Rosendo when he became a Daddy. He adored his wife and kids. They were everything to him. Whether at Bella's basketball games or picking them up early from school/daycare to take them for ice cream, the highlight of his day came when he was able to spend time with his kids. On two occasions the family traveled to Disneyworld in Florida where they all got to meet Mickey Mouse. The happiness he saw in the eyes of his children brought the joy to his life that he had never felt before.
Life for Alexis, Arabella, Ariella, and Ryland will never be the same without Rosendo. We give all praise, honor, and thanks to our Dear Lord who gave us Rosendo Ybarra for 48 years. Rosendo will now be watching from Heaven until we are all reunited. His memory will forever be in our hearts. Please keep the soul of Rosendo and the lives of his Family, especially his three children, in your prayers during this most difficult time.
Till we meet again, Love you Daddy!!
Preceding Rosendo Ybarra in death are his parents, Camilo and Sara Elia Ybarra.
Left to cherish his memory are his wife, Alexis Guzman; his Precious Daughters, Arabella Skye Ybarra and Ariella London Ybarra, as well as his Beautiful Son, Ryland Wesley Ybarra; three sisters, Rosa Elia (Fidencio Badillo) Ybarra, Rosalinda (Saul) Salas, Floraine (Homer Rios) Ybarra; a brother, Camilo Ybarra; and many nieces and nephews.
Visitation will be held from 3 to 8 p.m. with a 7 p.m. rosary Wednesday, June 15, 2022, at Memorial Funeral Home, 208 E. Canton Rd in Edinburg. Funeral service will take place at 12 p.m. Thursday, June 16, 2022, at Holy Family Catholic Church in Edinburg. Interment will follow at Hillcrest Memorial Park in Edinburg.
Pallbearers are Juan Mendoza, Mario Lamas, Rene Leal, Julian Ybarra, Christian Rios, Charlie Maldonado. Honorary Pallbearers are Camilo Ybarra, Angel Rios, Lee Maldonado, Johnathan Maldonado.
Funeral services are under the direction of Memorial Funeral Home in Edinburg.