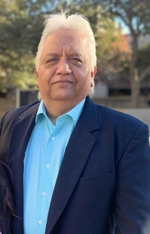 JOSE LUIS “JOE” ESPARZA
PHARR – Jose Luis “Joe” Esparza, 51, went to be with the Lord on August 15, 2020 in Edinburg, TX.
He is the second child born to Jose Esparza and Martha Silva Esparza in April of 1969 in McAllen, TX. Joe, also known to his family as “Wicho”, spent his formative years in Pharr, TX where he went to school and grew up with his brothers on their family’s ranch.
Joe attended two years of college at Pan American University in Edinburg, Texas. He was a graduate of PSJA High School Class of 1987 where he was a member of the marching band and received varsity letterman and honors for his musical talents as a tuba player. Joe later settled in Edinburg, TX to raise his family.
Joe was a hardworking man. His motto “To be better today than I was yesterday”. He started his career with selling life insurance with American Nationals in McAllen, TX. He was promoted from Sales Agent to Life Insurance Sales manager and received esteemed awards such as, Top 15 Leading Sales Manager in the Nation for the company two years in a row, and recognized as a Presidents Club Member and Millionaire Club Member. Joe also was employed as Life Insurance Sales Producer with Farmers Insurance in McAllen, TX where he gained recognition for being Top Producer in Life Insurance Sales. For the past 18 years, Joe has served as District Manager for the Mid Valley area with the Monitors Newspaper in McAllen, TX.
Joe will be remembered for being a man of faith. He often read the word of God and made sure to instill this faith in his children. Joe loved to reflect and write in his journal, he enjoyed cooking especially BBQing for his family and friends, he was an Elvis Presley fan since his your, developed a passion for Harley Davidson motorcycles, and appreciated the simplicity of a cup of coffee and conversation with anyone. He was a selfless man, one that would give the shirt off his back to those in need or stopped everything he was doing to be there for the ones he loved. He was a warrior and fought the good fight of life every day until the very end.
Joe is preceded in death by his mother, Martha Silva Esparza.
Joe is survived by his three greatest treasures his two children, Fidel J. Covarrubias and Melissa Esparza, along with his beloved dog, Spike; two brothers, Sylvester Esparza and Jorge Esparza; niece, Cassandra Esparza; two nephews, Joe and Erasmo Esparza. He will be loved and missed by the rest of the Esparza, Silva, Covarrubias families and many more.
Visitation will be held on the 26th of August, 2020, from 4 to 5 p.m. (family only) and 5 to 8 p.m. (public) at memorial Funeral Home in San Juan. Funeral service will take place at 2 p.m. Thursday, August 27, 2020. Interment will follow at Palm Valley Memorial Gardens in Pharr.
Funeral services are under the direction of Memorial Funeral Home of San Juan.