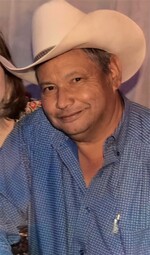 GILBERTO R. (GILBERT) GARZA
EDINBURG – Gilberto R. (Gilbert) Garza, 65, an amazing son, husband, father, grandfather, brother, cousin and friend went to be with his Lord on Sunday, February 14, 2021, at Doctors Hospital at Renaissance in Edinburg, Texas.
Affectionately known as Gilbert, Mr. Garza lived his entire life in Edinburg and was a member of Sacred Heart Catholic Church.
Gilbert was retired from Exxon/Mobil Energy since June of 2011, and served a career of 37 years.
Gilbert’s morning ritual since retirement consisted of coffee with his friends at Anita’s Cafe in Edinburg. It was there where he ate, visited, laughed and prepared for his day...every day. He was a staple there and will be missed, his seat there stands empty.

Besides his wife, children and grandchildren, Gilbert’s other love was for the beautiful red cattle he raised with his father. As an active member of the Santa Gertrudis Breeders International, he and his father established Double G Farms and raised registered Santa Gertrudis Cattle. His keen eye for cattle, business sense and foresight is what has helped make Double G Farms the successful registered cattle operation it is today. His stock has been exhibited and sold throughout the nation. His ranching legacy lives in his family and will continue to thrive with his help from above.

Gilberts love for life was found within his family. His biggest accomplishments were his children and grandchildren. He was blessed to have found his true love, of almost 40 years, Nilda. Together they created a home with a foundation made of love and our Holy Father as the center. Gilbert instilled in his family the importance of hard work, honesty, and that family always came first. As they raised their children, they spent their Saturdays at cattle shows and 4-H events where he loved to volunteer and help other 4-H families. While volunteering in the local 4-H club, Gilbert also served as a board member of the Hidalgo County 4-H Foundation. For over 30 years he volunteered at the Rio Grande Valley Livestock Show and served on the Beef Cattle Committee until retirement recently. Every spring break, Gilbert looked forward to the livestock show and watching his kids and nephews show his Santa Gertrudis cattle in the ring. To this day, Gilbert still spent his weekends traveling to cattle sales all over Texas.

A man of few words, loved the bright lights of Vegas and enjoyed surprising Nilda with a quick trip to Las Vegas every year. In fact, a promise was made that he would take his true love this July for their 40th Wedding Anniversary. As a couple they both were very active in their church, Sacred Heart Catholic Church in Edinburg, and there was not a Sunday that he would miss. Every morning, after his coffee at Anita's, Gilbert would sit at the kitchen table and help Nilda send out her bible scriptures for the day.

Gilbert adored his family; and as the eldest of five children, he felt a sense of pride in making sure each one of this siblings was taken care of. As his mom and dad grew older, Gilbert took on the duty of caring as much as he could for both of them. His sense of loyalty for his family laid deeply in his heart since he spent most of his youth with his grandparents in La Reforma, Texas.

The smile found on Gilbert's face these past couple of years was due to the infinite love he had for his grandchildren. Every holiday was even more special because of them. He was known for his "flip phone" and the few pictures that could be stored was filled with Sophia, Sebastian, and Andres.

The family asks that all COVID-19 protocols are being followed by practicing social distancing and double masking during the services.
Funeral services are under the direction of Memorial Funeral Home in Edinburg.