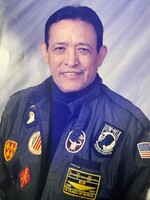 Armando Galaviz Villa of McAllen, Texas; a Vietnam Veteran, Mathematics Teacher who taught at La Joya ISD, PSJA ISD, McAllen ISD, and at the time of his retirement at Edinburg CISD (Economedes Campus), STC Developmental Math Department, and Upward Bound Program of UTRGV; passed away at the age of 71 on March 8, 2022, Tuesday, at MD Anderson Hospital in Houston.
He is preceded in death by his parents, Ramona Patterson and Walter Patterson.
Mr. Villa is survived by his spouse, Joycelyn Monzon-Villa; four children, Juan Armando (Janai) Villa, Jaime (Faith) Villa, Cynthia (Jay) Allerding, Veronika (Eric) Villa; 17 grandchildren; one great-grandchild; three siblings, Walter (Priscilla) Patterson, James (Dora) Patterson, Mary Lou (Philip) Patterson.
Visitation will be held from 5 to 8 p.m. on March 12, 13, and 14, 2022, (Saturday, Sunday, Monday) at Memorial Funeral Home, 208 E. Canton in Edinburg. Eulogies (celebration of life) will be given by family and friends during this time. Each night will be conducted with a rosary and reception. Funeral mass will take place at 10 a.m. Tuesday, March 15, 2022, at Sacred Heart Catholic Church in Edinburg. The date of the military honors for the interment of his cremated remains at the Rio Grande Valley State Veterans Cemetery will be announced at a later date.
The family is asking for prayers and mass offerings for Armando's eternal repose.
Funeral services are under the direction of Memorial Funeral Home in Edinburg.