To share your memory on the wall of Adalberto \"Chacho\" Garza, Jr. , sign in using one of the following options:

Provide comfort for the family by sending flowers or planting a tree in memory of Adalberto "Chacho" Garza, Jr.

Provide comfort for the family by sending flowers or planting a tree in memory of Adalberto "Chacho" Garza, Jr.

To send flowers to the family or plant a tree in memory of Adalberto "Chacho" Garza, Jr. , please visit our Heartfelt Sympathies Store.

Receive notifications about information and event scheduling for Adalberto "Chacho"

We encourage you to share your most beloved memories of Adalberto "Chacho" here, so that the family and other loved ones can always see it. You can upload cherished photographs, or share your favorite stories, and can even comment on those shared by others.

Posted Apr 16, 2019 at 09:34pm
Adalberto Garza was a brave Soldier and a strong Warrior. A man who made many sacrifices for his Country and his Family. A Hero who went far and above his call of duty. His life was a blessing, and his memories will be treasured. He was loved beyond words and will be greatly missed beyond measure. May he Rest In Peace.
Comment Share
Share via: 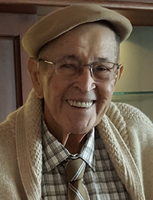